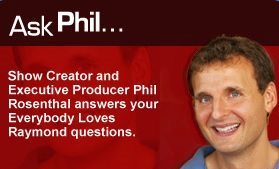 Phil Rosenthal is the Creator and Executive Producer of the hit CBS comedy, Everybody Loves Raymond, which ran for nine seasons, from 1996 through 2005. The series won the Emmy for “Outstanding Comedy Series” in 2003 and 2005, and was nominated in this category seven times. Rosenthal was nominated for an “Outstanding Writing for a Comedy Series” Emmy in 2000, 2002 and 2005.

Q:
I LOVE Everybody Loves Raymond! It’s my favorite show and I have every season on DVD. I have seen every episode about 4 times. I was just wondering why did the show have to end at season 9?

Phil Answers: Thank you. Season 9 is when we officially ran out of ideas. 210 is a lot to do of anything. We loved doing the show, but wanted to leave before we became lousy.

Q:
I have heard that Ray’s real family members have made occasional cameo appearances on the show. Is that true or just a rumor?

Phil Answers: True. Ray’s real brother, Richard, who Robert is based on, is in several episodes “Golf For It,” “The Toaster,” “The Checkbook.” Ray’s kids have all been in various episodes, as have mine we basically put everyone we know into as many episodes as we could. Ray’s real life father, Albert, is one of Frank’s lodge buddies and appears in all those episodes along with my dad, Max. We cast them together because we figured they deserve each other.

Q:
In the episode where Ray catches the kitchen on fire, was that real fire or some kind of special effects? It looks very real, and I was wondering if it was more dangerous than a regular show.

Q:
Phil, I noticed on the show no one ever mentioned Amy’s job. What was Amy’s job? Did she have a job?

Phil Answers: I think we mentioned early on that Amy was Debra’s friend from work—and that was a PR firm that handled sports teams. I just asked the actress that played Amy, and in her mind, she was in the Human Resources department.

Q:
When the family went to Italy, where exactly did they go? I know the spots they visited in Rome having been there myself but some of the other locations were not familiar to me. Also, what time of year were you filming there?

Q:
Where did you, Ray and the writers get the idea for the episode Robert’s date? Thanks, love the show. It’s the best!

Phil Answers: Thank you. We got that idea from one of our great writers, Jeremy Stevens, who had always felt like an outsider, and this was the ultimate “wanting to belong” episode.

Q:
How close is Ray Barone compared to Ray Romano in real life? Are both a lot alike?

Phil Answers: Our joke is that Ray Barone is a little smarter than Ray Romano.

Q:
How did Patricia Heaton get away with being pregnant a couple of times during the series? How did you hide it so that it wouldn’t affect her character?

Phil Answers: Our joke was that early on, you could have Patty hold a bowl in front of herself, then later, place her behind the couch, then later, have a steamship come onstage.

Q:
Is it true that the person who plays Robert’s wife, Amy, is actually your wife?

Phil Answers: I just checked with her, and she is, for now.

Phil Rosenthal was born in Queens, raised in Rockland, N.Y., and attended Hofstra University on Long Island. Starting out as an actor in New York, Phil also wrote and directed before relocating to Los Angeles in search of more acting opportunities.

Phil’s early credits include the series Man In The Family and A Family For Joe. He was also a supervising producer on the sitcoms Down the Shore and Coach. Rosenthal also directed a Coach episode.
Rosenthal has the distinction of having directed President Bill Clinton in the White House Correspondents Dinner video, which was shown to wide acclaim at the April 2000 event.

He co-wrote the America: A Tribute to Heroes telethon which aired on all four networks, won a Peabody Award and an Emmy nomination for “Outstanding Writing.”
Rosenthal won the 2002 Writers Guild Award for “Excellence in Television Writing” for his script, Italy.

He returned to his roots as an actor in the James Brooks feature film Spanglish, in which he plays Adam Sandler’s sous chef. Additionally, he recently appeared on HBO’s hit comedy, Curb Your Enthusiasm.

Phil also tours and stars in a very funny stage show entitled “Inside the Writer’s Room.” The show includes members of the show’s writing staff and features anecdotes and behind-the-stories about the history of the show. Click here for appearance dates and video clips.

Rosenthal lives in Los Angeles, with his wife, actress Monica Horan (who plays Amy on Everybody Loves Raymond), and their two children. His birthday is January 27.