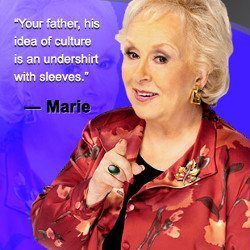 Multiple award-winning actress Doris Roberts has distinguished herself with her versatility on Broadway and in numerous film and television roles. She starred on Broadway in “The Death of Bessie Smith,” “Marathon ’33,” “The Desk Set,” “Last of the Red Hot Lovers,” “Cheaters,” “The Secret Affairs of Mildred Wild” and “Bad Habits,” for which she won the Outer Critics Circle Award. She most recently appeared on Broadway in “Thoroughly Modern Millie.”

Her more than 27 feature film credits include “My Giant,” “The Grass Harp,” “Little Murders,” “Used People,” “National Lampoon’s Christmas Vacation,” “No way to Treat a Lady,” “The Honeymoon Killers,” “A New Leaf,” “The Heartbreak Kid,” “Hester Street,” “The Rose,” “Such Good Friends,” “The Night We Never Met” and “All Over the Girl.” Among her television film credits are “The Diary of Anne Frank,” “It Happened One Christmas,” “Ruby and Oswald,” “A Time to Heal” and, on CBS, “1,000 Men and a Baby,” “One True Lvoe” and “Sons of Mistletoe.” In addition, Roberts recently starred in the CBS television movie, “Raising Waylon,” as well as the critically acclaimed cable film, “A Time to Remember.”

Roberts’ memoir, Are You Hungry, Dear? was published in 2003 and hit the New York Times best seller list shortly after its debut.

Doris has been appointed a cultural ambassador by the U.S. State Department, which sends her to underprivileged countries to speak to young people about hope.

Doris was born in St. Louis and lives in Los Angeles. Her birth date is Nov. 4. 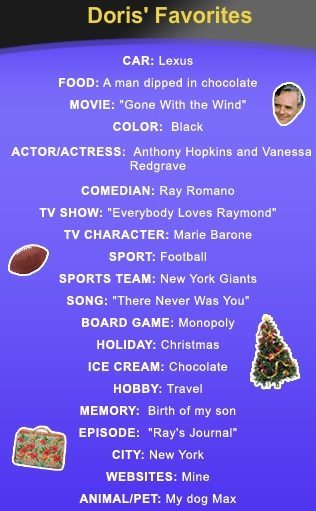