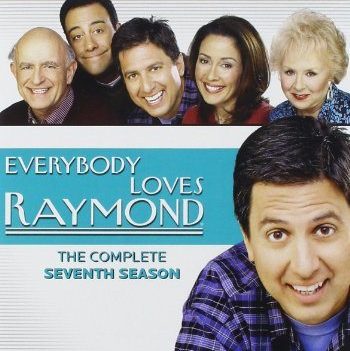 Click here to purchase the Everybody Loves Raymond Season 7 DVD’s!

Depressed that Marie and Debra can’t seem to resolve their differences, Robert decides to join a support group that the family believes is a cult. After taking the feud between Marie and Debra very hard, Robert’s cousin Gerard convinces him to attend a “Pathway” meeting — a group seeking the path to inner peace and unlocking one’s potential. Although Robert is rejuvenated by his encounter with “Pathway,” the family is concerned it’s a cult and they convince Ray to go to a meeting to see what Robert’s gotten himself into.

After arguing with Ray over his inability to help her with the housework, Debra becomes intrigued when their friends, Linda and Bernie, mention they’ve been seeing a marriage counselor. Although Ray is completely against the idea, he quickly adopts a cooperative attitude when they meet the therapist, Pamela, who instantly takes a liking to Ray when he claims that he’ll do anything to make his marriage work. Frustrated by the session, Debra accuses Ray of acting phony during therapy. Marie intercedes and conducts a mock “therapy” session with them which leads to a breakthrough that leaves even Ray horrified.

When Ally’s teacher, Miss Purcell, overhears Ray commenting about the kids’ excessive workload, she invites Raymond to address the curriculum review board and gives him a mountain of material for review and evaluation. But when Raymond still hasn’t touched the material the night before the review, and Debra refuses to bail him out, he goes to the one person he knows will help him with his homework… Marie.

When the twins doodle on the back of Ray’s eulogy and then give it to Marie and Frank, Ray attempts to recover the kids pictures before Frank finds out what he did. After Marie confides she saw the eulogy and is upset that Ray didn’t write one for her, Ray explains he wrote Frank’s because he wanted to see if he could paint a softer picture of his father. When he includes a childhood story of Frank petting Ray’s bunny, his father becomes incensed – not about the eulogy – but about the gentle tale that stands to ruin Frank’s tough guy image.

After Ray and Debra spend an evening apart, Ray admits he no longer enjoys his juvenile pursuits with his friends. Thrilled that Ray is finally growing up, Debra invites him to attend a book reading where Ray winds up falling asleep. Concerned that he doesn’t know where he belongs, a reluctant Ray agrees to join Frank for a steam bath with his buddies at the lodge. To Raymond’s surprise and Debra’s dismay, Ray winds up thoroughly enjoying himself and contemplates joining.

Debra indicates she’s tired of sharing all her space with Ray, so he decides to give her exclusive use of their bathroom. Waiting to take a shower in the kids’ bathroom, Ray realizes he’s made a huge mistake when he finds puddles on the floor and the medicine cabinet overrun with action figures. Disgusted by the kids’ mess, Ray attempts to return to his old domain. But Debra, who’s enjoying her newfound privacy, won’t give it up without a fight.

Ray and Debra are excited to have finally met a couple, Neil and Lauren, who are just like them, but Ray starts having mixed feelings when their son, Spencer, wreaks havoc around the Barone household.

Robert is excited because he’s dating a great new woman, and hints to Ray and Debra that she might even be “The One,”. When Ray and Debra invite Robert and Angela over for dinner, the evening is wonderful until Ray sees Angela do something really strange. Shocked by her behavior, Ray tells Robert and Debra who refuse to believe him, and Robert gets upset, believing Ray can’t stand to see him happy.

While Raymond, Robert and Frank don’t want to bring up the fact that Marie is having vision trouble, Debra decides to level with her and suggests she visit an eye doctor. When Marie winds up with a pair of specs just in time for the holidays, she winds up putting the family on edge when she starts seeing them for better and for worse!

When Raymond lies and tells Debra that he’s already bought her an incredibly thoughtful Christmas present, he frantically tries to figure out what to get. In a fit of desperation, Ray turns to someone in his family who winds up knowing more about his wife than he does.

Frank must find a way to fix his image with Ally when she catches him “sampling” some trail mix at the supermarket. After Ally sees Frank get into an argument with the assistant produce manager, Debra tells Ray to talk to Frank about the incident. Ray reluctantly tells his father he upset Ally, and now Frank must find a way to make amends to his granddaughter.

When Ray’s friend, Andy, gets a job booking guests for a local sports radio show, Ray offers to appear as a guest, only to find out that the show’s host, Jerry Musso, hates him. After soliciting opinions from his entire family about the situation, Ray winds up getting into fight with Robert, who seems delighted by the notion that someone actually doesn’t like Ray.

Tired of being labeled the “evil witch” around the house, Debra convinces Ray that it’s his turn to discipline the kids. While leaving to take Ally to a Frontier Girls meeting, Debra tells Ray that he must force the twins to clean up their room or they can’t go out and play. Reluctant at first to spoil their fun, Raymond starts to tire of their devilish antics and winds up going overboard with the boys’ punishment. Meanwhile, Frank proclaims himself a model disciplinarian, only to learn that despite his scare tactics, Ray and Robert broke plenty of rules around the house.

Ray starts spending less time at home when he volunteers at a hospital and becomes a hit with the patients. After Debra forces Ray to do some charity work at a local hospital, he winds up enjoying himself because the patients treat him like he’s a celebrity. When Ray’s newfound calling causes him to neglect his family responsibilities, Debra winds up regretting her decision to turn him into a Good Samaritan.

Robert is caught in a compromising position by Amy’s parents when they arrive unexpectedly at her apartment. After encountering another awkward moment with Robert, Amy’s parents try to dissuade their daughter from marrying him, only to wind up coming to blows with Marie and Frank, who have been invited to Amy’s for a peaceful family brunch. Meanwhile, Amy’s brother, Peter, tries to enlist Ray’s support in helping him stop the impending nuptials.

When Robert is put in charge of selecting his wedding invitations, Ray suggests he intentionally botch the assignment so that Amy will let Robert off the hook with their wedding plans. After convincing Robert to write a horrible version of the invitation so that Amy will relieve him of his wedding duties, Ray’s plan backfires when Amy tells Robert that their wedding planner mailed them out to her family. Horrified, Robert is forced to confess Ray’s “plan” making Amy, Marie and Debra livid.

Directed by Gary Halvorian
Written by Joe Rubin and George B. White III

Raymond is horrified when he thinks his “cookie nemesis” flirted with him. When Debra is too sick to take Ally to a sleepover, Ray reluctantly agrees to take her despite the fact he must come face to face with Peggy, the mom who physically assaulted him during the last cookie drive. Surprisingly, Ray winds up mending fences with her when he helps Peggy pitch a tent in her living room for the girls. However, their newfound friendship is short-lived after Peggy pats Ray on the behind as a way of saying ‘thanks’ and he thinks she’s just made a pass at him.

Debra gets annoyed with Ray when he seems pleased that she’s picked one of her attractive friends to replace her if she dies. When Marie informs them an elderly neighbor, Rose Caputo, passed away, Frank wonders why Marie is taking the news so hard and she reveals she had chosen Rose to “replace” her if she died before Frank. That night, Debra tells Ray she’s chosen her attractive friend Linda for him. Debra gets angry, though, when Ray smiles at the thought of Linda, and is further upset when Ray suggests Linda’s out-of-shape husband Bernie for her. Debra decides to cancel plans with Bernie and Linda because she wants to keep Ray away from his “future wife” – only to run into them by accident at Rose’s wake.

Debra gives a bridal shower for Amy, but her good intentions get sidetracked by Marie’s overzealous participation. When Marie attempts to “take over” Amy’s wedding shower, Debra gets upset and yells at her, prompting Marie to leave in a huff. Returning to the party festivities, Debra starts drinking a little too much champagne and winds up being too tipsy to drive. When she can’t reach Ray on the phone, Debra decides to take a nap in her car with the keys in the ignition and is awakened by a police officer, who arrests her for drunk driving. When her license is suspended, Debra finds herself in a precarious situation when she’s forced to rely on Marie for help.

Ray and Debra wind up in a two-week standoff over a suitcase. When Robert asks Ray if he can borrow a suitcase sitting on the stairway landing for his honeymoon, Ray explains he and Debra have been locked in an “unspoken” battle of wills since a weekend trip over who is responsible for putting the suitcase away. Although Robert thinks Ray and Debra are insane, Frank and Marie can easily relate and offer their own words of wisdom – with Frank counseling Ray and Marie advising Debra on how to resolve their marital differences.

Debra and Marie give Raymond a guilt trip when they find out that the bachelor party he hosted for Robert was a huge disappointment. After playing cards and eating pizza at Robert’s apartment, Ray is forced to leave the party early and Debra, who is surprised that Ray is home so early, informs him that he dropped the ball and really let his brother down. Debra suggests Ray host a “real” bachelor party and concocts a plan along with Marie and Amy to surprise Robert with another one. While Amy asks Ray to invite her brother and father, Ray puts together an odd mix of partygoers, hoping that this time around, he’ll do the job right.

Like their relationship, Robert and Amy’s road to the altar is rocky. When Peter attempts to bury the hatchet between himself, Robert and Ray, Robert suspects he’s up to no good and assigns Ray to keep an eye on him.

Robert and Amy exchange vows in a wedding ceremony that has the Barone family tradition written all over it.

If you like poker like Ray Romano, you can play online at Americas Cardroom! Redeem the Americas Cardroom promo code at https://usacasinocodes.com/americas-cardroom-review-bonus-code/ and get a bonus of up to $1,000. Find more reviews of the top US poker codes at USACasinoCodes.com.

What were your favorite scenes of Season 7? Leave us a review!