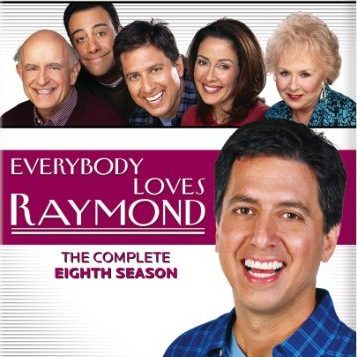 When the twins wind up having a great time with Ray on the golf course, a tightly wound Debra admits to her lackadaisical husband that she’s disappointed they no longer have fun together. Convinced she can drop her guard and still have a good time, Debra decides to join Ray for a round of golf but her plan lands in the rough when the pair discovers the true meaning of being “teed-off.”

When Amy becomes annoyed that Marie is already asking when she’s going to send out their thank you notes from the wedding, Debra seizes the opportunity to convince her friend to join forces against her mother in-law’s reign of aggravation. Thrilled that she finally has an ally who can stand up with her against Marie, Debra’s plan is destined for failure when Ray and Robert beg her to make nice with their mother.

When Michael stays home from school for two days in a row, Ray suspects he simply has homework he hasn’t finished, but Michael claims that’s not the case. While everyone in the family has an explanation for Michael’s sudden aversion to school, Ray decides the tough love approach is the way to go — making Michael spend the day without television, games or comics. When Michael is forced to watch Ray work in his downstairs office, the sheer boredom leads him to finally confide why he doesn’t want to return to class.

When Debra and Ray become embroiled in an argument in front of Robert, he tells Ray that in order to find happiness with Debra, he needs to be more affectionate with her. When Ray decides to give it a shot and Debra rebuffs his advances, he becomes annoyed that he’s even contemplated taking advice from Robert. Meanwhile, Amy is also in for a rude awakening when she tries offering marital advice to Debra and Marie.

Tired of using Frank, Debra is pleased when she finds out Gianni can install a new stove in their kitchen. However, the thrill of having a contractor in the house gets old fast when Gianni starts taking his sweet time to complete the job. Fed up, Debra tells Ray to fire his friend immediately, but Debra’s directive doesn’t go as planned.

Although Robert initially tries to be civil with his houseguest, he finally loses it when Peter confronts him in front of Ray and Debra about why Robert is treating him so poorly. When Ray reluctantly agrees to drive Peter home to Pennsylvania, they arrive to discover Peter’s parents packing up his things and turning his room into a Bible study. Meanwhile, Robert overhears a conversation that hits close to home when the Barones and Amy talk about the difficulties of having a 40-year-old man living under the same roof with his mother and father.

When Ray lies to his mother to get out of spending the evening with her, the lie grows when Debra and the twins cover for him. Then, Robert tries to spill the beans and even more lies are told. However, when Ray and Debra start lying to each other, they wind up having a huge fight about it in front of the family, until Marie amazingly breaks down their intricate deception.

After Debra’s mother, Lois, suggests throwing Debra an “old-fashioned English Tea Party,” Ray reluctantly agrees after she promises to do all the work. Later, Debra realizes Ray is planning something for her birthday and suggests he change the theme to a Chinese banquet. Unfortunately, Lois has already started planning the tea party and now Ray must find a way to convince her to change her plans.

When the Barones arrive at the Pennsylvania home of Amy’s parents, they find that their differing family traditions encourage lots of lively conversation. If only the MacDougalls owned a television set! Things start to come together when the families separate into Pilgrims and Indians for the annual MacDougall Thanksgiving Family Pageant.

Feeling guilty about a childhood mistake, Ray brings Frank a bag of CDs of all his jazz records, but they wind up in the basement with a stack of electronic gifts that Frank and Marie never use. Steamed that his gifts have been discarded, Ray is further dejected when Robert presents Frank with vintage jazz albums and Frank reveals that he prefers the records to the digital recordings. Aggravated by this obvious display of one-upmanship, Ray winds up back in the driver’s seat when he discovers he may not be responsible for ruining Frank’s record collection after all.

When Ray arrives at the lodge to find Debra having a great time singing and drinking with Frank’s friends, he can’t help but mock Debra’s new geriatric social circle until Debra tells Ray he could learn a lesson from the older gentlemen. Later, Marie and her bridge club complain that Debra is riling up their husbands. While Frank defends Debra, telling the old women they’re crazy, in private he tells Ray he’s got to get Debra to quit because his cronies have been ogling Debra and making unsavory comments behind her back.

After mistakenly leaving Michael and Geoffrey home alone, Debra and Ray race home and discover that Ally stepped in to take care of the boys. After seeing how well Ally handled the situation, Ray suggests she may be ready to help out around the house, and Debra embraces the idea. Later, Marie arrives and is shocked to learn Ally is babysitting, doing laundry and making sandwiches for everyone and accuses them of turning Ally into a slave.

After realizing that Debra places bets with the kids on his questionable behavior traits, Ray is disgusted that his own children now think he’s a “doof.” When reflecting upon his own childhood, Ray remembers that Marie used to complain about Frank in front of him all the time — making him think his Dad was a loser. Concerned that his own kids will think of him the same way as Frank, Ray contemplates how to get the kids back on his side.

When Debra assures Ray she’ll be on time for an important awards dinner, Ray hopes for the best and waits for her. But when she misses their 6:30 PM departure deadline, Ray decides to teach her a lesson in lateness she won’t forget.

After finding out that Peggy, the mom he loves to hate, is hosting an elegant birthday celebration in honor of her daughter, Ray takes Ally dress shopping and is disgusted when he finds out that he has to shell out a small fortune so that his daughter can attend the event.

Robert gets caught in the middle when Marie and Amy argue about whether he should retire from the police force.

After including stories about Robert, Frank and Marie in his speech, Ray is horrified when Amy clues him in on his huge omission. Feeling guilty for this major oversight, Ray must now figure out a way to make it up to Debra.

Amy’s parents put Robert on the defensive when they point out his strange habit of touching food to his chin before he eats it. When Amy confides in Debra, who tells her that Robert’s strange behavior could be psychological, she devises a plan to break him of his chin habit for good.

When the MacDougalls are invited to spend Easter with the Barones, the families attempt to bond over a 500-piece puzzle. While members of the Barone and MacDougall families get frustrated with the complicated puzzle, Ray and Pat continue working on it until the wee hours of the night while sharing private stories about themselves and their families. But when Debra, Marie, Robert and Peter find out about Ray and Pat’s newfound friendship, jealousy ensues.

When Robert informs Ray that Amy filled him in on some juicy gossip about him, Ray decides to get even with Debra by sharing some nasty secrets of his own.

After a modeling agent tells Robert he has a unique look, he convinces him to pose for head shots with their “in-house” photographer. But when Robert and Ray return for the pictures, they are surprised to find the modeling agency has mysteriously disappeared.

A young man, Sam Gilula, arrives at Frank and Marie’s and everyone is surprised when he and Frank fondly embrace. Sam explains Frank had been quite an inspiration to him as a lad, a mentor in fact, much to Ray and Robert’s disbelief. Later, Ray and Robert make fun of Frank, wondering how he could have inspired anyone.

Robert and Ray end up with the mother of all guilt trips when they decide not to help Marie with a home project so they can land a prime spot on the golf course. Their overnight wait in the car for a tee time becomes a brawl over their respective roles in their parents’ future.

What were your favorite scenes of Season 8? Leave us a review!