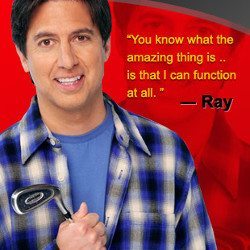 Ray Romano admits that he always knew he could make his friends laugh, but he never really gave standup comedy any serious thought until one fateful open-mike night at a New York comedy club in 1984. He did well, the bug bit hard and Romano was smitten. After several odd jobs, including futon mattress delivery boy by day and journeyman comedian by night, he decided to pursue comedy full time, eventually winning a standup comedy competition that same year.

Following that success, Romano’s regular appearances at comedy clubs throughout the country led to guest spots on “The Tonight Show” starring Johnny Carson, then with Jay Leno and finally on the “Late Show” with David Letterman, on the CBS Television Network, where host David Letterman recognized his talent and offered him a development deal with his production company, Worldwide Pants Incorporated. From that association, “Everbody Loves Raymond” evolved.

Romano has since performed for President Bill Clinton and Vice President Al Gore at the White House Correspondents Dinner, headlined the Toyota Comedy Festival at New York’s Carnegie Hall, guest-hosted “Saturday Night Live”, appeared (and won $125,000 for charity) on “Who Wants to Be a Millionaire” and appeared on The Grammy Awards.

He won a TV Guide Award for “Actor of the Year in a Comedy Series,” an American Comedy Award as the “Funniest Male Lead in a TV Series” and the 1999 Television Critics Association Award for “Outstanding Individual Achievement in Comedy.”

He is the author of the book Everything and a Kite, based on his comedy. He released a CD titled “Ray Romano: Live at Carnegie Hall” and donated all of the proceeds to the September 11 Fund. The CD was nominated for a Grammy Award.

His feature film credits include Eulogy and “Welcome to Mooseport.” He can also be heard as a the voice of Manny the Woolly Mammoth in all three “Ice Age” films.

Romano, who is originially from Forest Hills, NY, lives with his wife and four children in Los Angeles. His birth date is Dec. 21. 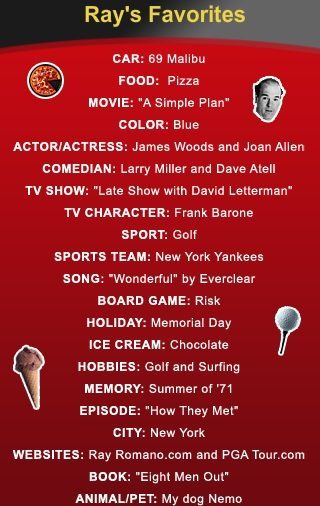